Tomorrow night Channel 4 airs the first in a new series called Katie, My Beautiful Friends following Katie Piper, the TV presenter who has facially scarred after an acid attack, as she meets young people who also been scarred. I haven’t seen the show so I can comment on it yet, but this is a subject close to my heart. My wife Diane was scarred after she was scalded as a young child. She was burnt all over her right arm and her left side, and after a series of surgeries to ensure she could still use her arm was left with a scar that runs from her shoulder to her hand with other scars on her back and bum.

I met her when she was 18 at the Electric Ballroom in Camden, and fell in love with her straight away. It took me 6 years to get her to go out with me, mainly due to my crap chat up technique, and we have been together for nearly 16 years. She is one of the most amazing people I have ever met, both internally and externally. She is as beautiful on the outside as she is in on the inside. If I am truthful, I saw her scar on that first night at the Ballroom and knew by the way she had it exposed for all to see that she was going to be the girl for me. Not only was it beautiful scar (I must admit I do find scars sexy) but I could tell from the way she held herself that she was a proud strong woman. There was no apology or desire to hide her scar. She defiantly had it on show, and I knew it was to dare someone to comment on it.

I was right, and as I got to know her I witnessed just how weird people can be about scars. I have been disabled since birth, and thought I had seen it all until I met Diane. My first experience of just how hateful people can be was when a woman started screaming at Diane to hide her scar, from the other side of the street! This woman was offended that Diane was walking around with a her scarred skin on show, but what really shocked my was that this woman was black. For some reason I thought she would have understood how awful it is be discriminated against due to something only skin deep. But it seemed that anyone might feel they could react to seeing a scar in ways that changed the way I saw the world. Once a homeless man, who was sleeping rough in Soho, stinking of booze and urine with a dog on a string and who was also blind in one eye shouted out to Diane asking why didn’t she just chop off such an ugly arm. The fact it worked perfectly didn’t matter. Time and time again she would be the target of anger and vitriol purely because she did not hide her scar. Apparently this was nothing compared to the reactions of people to her scar when Diane was a child. What kind of person would try to make a child ashamed of being scarred? 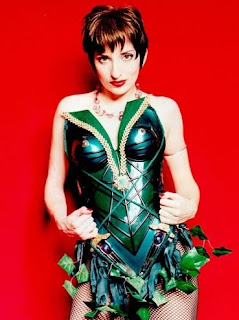 But Diane was not only not ashamed, she was proud. She trained through out her youth to be a ballet dancer, and never let her scar stop her. Not only did she dance but she also acted in plays and films, and after we got together, she started modelling. She appeared in photo shoots for major magazines, fashion companies and publicity campaigns. We started up a band called Erotics, and began playing gigs all over the UK. She was the lead singer and was a superb front person. No one even commented on our female lead singer having a scar (although they did freak about me being a wheelchair user – so I have no idea what that says about the music industry).

What was great however, was that we gradually noticed a change in the way people reacted to her scar. Slowly it went from people reacting badly to truly positive. It became almost trendy. She did a fashion show, and a make up artist actually flew from Holland just so he could do Diane’s make up. I can honestly say it has been years since some even mentioned Diane’s scars, either to her face or privately to me.

I must admit while I am pleased that TV is actually doing something to confront the way people who have been scarred are treated in society, I feel it is really sad that other people are still finding themselves confronting attitudes that we thought had gone the way of other discrimination. I just hope that this show helps other people gain the strength and confidence that oozes out of my wonderful wife.

Personally I feel that only those who could be described as imperfect are perfect. I have mixed with all manner of so called “Beautiful People” in my life, and have found them all to be wanting. But not only is my scarred wife a fantastic, talented, stunning person on the inside, but her scar makes her even more beautiful on the outside. Like a work of art created by accident, medicine and nature. That is how I feel we should see all scars and deformity. True perfection lies in the imperfections.