Right, it seems that the entire media wants to focus on the tragedy of the disabled, whether we have managed to triumph over it or not. I have always been against this kind of coverage but it seems that people who agree with me are being ignored. So if everyone out there wants to hear the tragedies of disabled people I intend to be on that band wagon. (I do hope you getting the irony here… it doesn’t always work in the written medium) 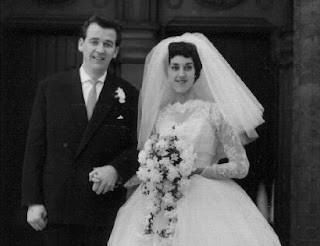 So where shall I begin? Well at the beginning I suppose. I was born in 1965 to Michael and Joyce McGrath (pictured above). They had been trying to have kids for three years and were overjoyed when they found they had fallen pregnant. When I was born my Dad ran round my home town of Luton shouting with joy, hugging strangers and handing out cigars. But as soon as I came home they began to worry. I just would not stop crying. Nurses and doctors visited and told my Mum she was a panicky parent. This went on for five weeks. Just screaming and screaming. Then I went quiet. My parents rushed me to an aunt who was an ex-nurse and she said something was wrong… very wrong. They took me to hospital and it was soon discovered I had cancer. It was in fact an Adrenal Neuroblastoma, which even today is very difficult to beat. I was extremely lucky, as my surgeon had just read about an experimental drug that was being trialled and he applied to have me put on the trial. So with a major surgery, radical radiotherapy and this new chemotherapy, which lasted for five years, I now faced an uncertain future. In fact my [parents were told not to expect me to live long. “Go home and enjoy the time you have left with him” my Mum was told. 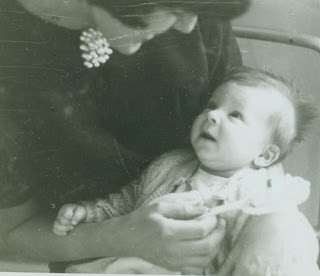 So home I went. That’s me with my Mum, all ill but very loved. I didn’t die though. Obviously. In fact I went from strength to strength. There were hick ups. I got two huge sores on my feet, which nearly killed me with infection, and I broke my right leg almost in half, while trying to pick up a train that I was playing with – kind of forgot I couldn’t walk that well – but when I got to the age of five my parents were told he is in remission. Cancer free. I had a future at last. At which point my Father died, from a heart attack. My Mum had a nervous breakdown and life sort of fell apart. My Dad’s parents were awful, and our lives were thrown into turmoil yet again. My brother came out worst. My Mum had to spend so much time looking after me that Steve had kind of become Dad’s kid. So when Dad suddenly disappeared he couldn’t understand what had happened. Mum tried to explain, but he was so little the “Dad is with Jesus” didn’t help much. So the great news of my beating the big C didn’t matter much once Dad was gone.

I started school and was immediately bullied for being the limpy kid. I fought back, but as anyone who has been the target of the bully knows it’s not fun. When I was eight, my Mum remarried. Now I will admit that by now both Steve and me were horribly spoilt kids, but our new Step Dad was… let’s say very strict. As he is still around I won’t go into it all too deeply, but it wasn’t much fun. But time passed as it does and I was soon nearing an age where I could protect myself. But at the age of fifteen my spine collapsed. It actually happened at Wembley Arena at the farewell gig of my hero Gary Numan. I had great seats, in the fifth row, but had to remove myself to the back as the pain was unbearable. I somehow managed to get myself home and fell into bed. The next day I arose early as it was the day of my German O Level (no I did not spend the night studying – I was a Numanoid!) but when I tried to get out of bed I collapsed into a heap on the floor. 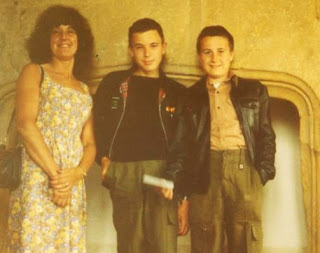 Oh, this is the last picture I had of me standing up. I’m in the middle, with my Mum and brother Steve. Anyway, I was still sent to school in a cab, but when I arrived I collapsed again and was rushed to hospital. While I was there I was told I was dying as I had cancer again. But no it was actually a huge spinal collapse, caused by a side effect of my experimental chemo as a baby. After two major operations (14 and 15 hours), two bouts of MRSA and one heart attack on the operating table I spent nine months in hospital only to leave in a wheelchair. No one told me at this time I wouldn’t walk again, and so I spent three years fighting to get back on my legs. After this time I went to my surgeon to say I was giving up, only to be told I never had any chance but they didn’t tell me that as they didn’t want to depress me. Nice.

Now at this point I feel I should stop. I could go on about being in an abusive relationship for years, or my second broken back just as my career was taking off, just over ten years ago, that nearly killed me and has left me in chronic pain, but I actually want to examine that fact that while this might be read as a list of tragedy it all led me to be the person I am today. And I like who I am, so everything that has happened is must be a good thing. To always go on about how becoming disabled is a tragedy means that nothing good can come of it, and to make anyone disabled who succeeds triumphant means that those who are having a hard time coming to terms with it must be lacking something that those super humans (dig, dig C4) have in spades. 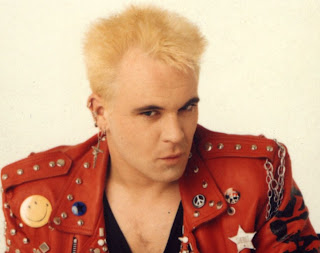 All I know is that my disability has shaped my life hugely, and has allowed me to have experiences that most non-disabled people can only dream of. I have been a TV star, toured with Gary Numan, and lived a rock and roll lifestyle second to none. I then met and later married the girl of my dreams, someone so amazing that she cared for me while I recovered from my second broken back and even made it fun. Yes she made six months on bed rest fun. It may sound weird but I know part of what she loves in me is the person I am because of my disability and so for that, if nothing else, I refuse to see any tragedy in anything illness or disability that has entered my life. 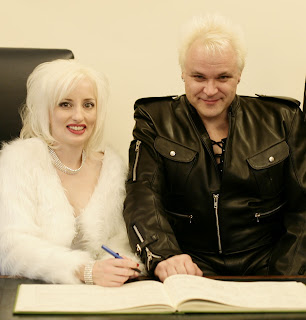 But I could easily make my life a list of one awful event after another. I could have then made a big deal of how brave I’d been to triumph over the crap cards life had dealt me. And the media would have lapped it up, but I just cannot. Instead I will say what I have always said… Disability was the making of me. It set me free and allowed me to live a life that I wouldn’t give up for a second. Not for legs that work, not for being in tip top health, not even if I could fly. My disability is super positive element in my life, and I just wish that the media would focus on how positive being disabled can be. Just once would be nice.

So as you watch the stream of stories over this Paralympic period, try not to be sucked into the feeling that everyone has in some way beaten the worst thing that could ever happen to them. I mean if they weren’t disabled they wouldn’t be at the games, they’d be at home watching them on the TV and missing out on the chance to represent their country in a global sporting event. Disability can be a positive thing and if more people believed this then if it ever came into their lives they might be able to cope better, recover quicker and rebuild their life to become better than it was pre-disability.

Right got that off my chest. I’m currently dying my hair ready for the Paralympic Opening Ceremonies tomorrow. Got to look good, even if I am one of 4000. If you see a red head in a chair who is out of time… it’s probably me!