Recently I went down to Parliment as part of the delgation that handed in my home town of Luton’s application to be made a city as part of the Queen’s jubliee. I felt it was time to give something back to a place that I have come to understand played a massive part in making me the person I am today. 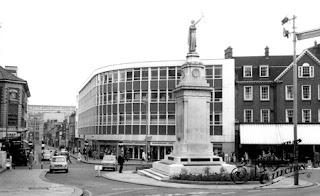 Like most people who grew up in a provincial town, I always felt that I was missing out on something while I lived in Luton. The draw of the big city always tugged at me, and as soon as I could I moved down to London. Even before I lived here I would spend a huge sum of money on petrol to cover driving down to the big smoke to go gigging, clubbing and shopping. And I will admit I had a really great time in London, but as I get older I also see what a great place Luton is and was.

The first thing that Luton gave to me was an expectation of being treated equally. Even though I have been disabled since birth, I never really found that I was actively discriminated against all the time I lived there. I attended a mainstream school throuhgout my education. It is only recently, after joining ALLFIE in their battle for inclusive education that I realise how rare it is for disabled children to be given the chance to go to a “normal” school. Especially back in the early 70’s! Yet in Luton I was given the chance to do so, not only in my early school career, but throught from the age of 5 to 18. It was only when I started looking to go to university that I found my way closed. Some schools needed no adapatations, some made the changes I needed easily. My high school, Putteridge High, undertook a program of building that left it with a fully accessible school building. So not only did I go there, but so did a few other disabled kids. Not many schools, can claim that they were fully inclusive in the late 70’s. Very few can claim that even today.

But not only were the buildings accessible, but so was the attitude towards disabled pupils. I was expected to do everything my able bodied class mates did. I was also given the same expectations. I saw my future as being just like everyone elses. My disability would not be a barrier to my dreams in any way. Yes I couldn’t go to uni, but that wasn’t anyone at my schools fault. It was just that they were ahead of the rest of the educational establishment in how they facilitated disabled students. I didn’t mind though. Another thing that Luton gave me was an expectation that talent would be enough to get you on.

It was a very working class place, with the majority of Lutonians working in the major industries of Luton, like Vauxhall and the airport, and the place had an attitude that talent would be enough. Most of the people I knew and grew up with had parent’s that had ben promoted through the ranks of where they worked until they had very good jobs and good standards of living. All on talent and skill. So I went out into the world with the belief that if I was good at something I would get on in that field. Hence why I pushed to get into the media and music industries. I was good so why shouldn’t I? It is also this belief that has enabled me to change direction and career without any real fear.

Once I left school, in my wheelchair, I did find some barriers. But no where near as many as I might have found in other places. Most of Luton is accessible. The shopping centre was superb, many of the pubs and clubs too. And anywhere that was a bit difficult saw no problem in be as helpful as possible. They also made changes and became accessible. I remember the local cimema going to great lengths to become wheelchair accessible after I tried to see a film but was turned away. I contacted the managment and they were fantastic. We worked together and made all the ground floor screens accessible. It was this experience that got me active on issues of access. I really thought that if everyone was this cool, then it wouldn’t be long before accessibility was the norm.

Now I am getting older, and am working in the field of inclusion and inclusive design it still shocks me when I have to attend a meeting with designers and architects who seem to think that accessibility is something of an after thought. I even meet a few who see my desire to have the chance to experience their building just like evryone else as some kind of insult to their design. I would never have thought that 30 years after I left school I would be having arguements over why wheelchair users should have the right to access a building throught the front door. No Luton didn’t prepare me for that.

So I feel I must say Thank You to Luton. Sure you have your problems, but then where doesn’t? All I know is that you gave me the skills, confidence and self belief to be the person I am, and to go out into the world with the desire to make it a better place and give young people all over the UK the chance to experience what it is like to grow up with the chance to be considered an equal, whatever your difference or disability might be. Good luck with your city bid and a “big up” to everyone I know and knew in Luton.