To everyone that reads my blog, I have decided to change what I use it for. You see I have lust landed a post of columnist for the new magazine PosAbility and kind of want to keep a lot of the stuff I would have once blogged about for publication. Instead I thought I’d turn this blog into a diary type affair. Of course there’ll be comment, as nothing can stop me moaning, but with a more personal edge.

2012 started off as a weird year. I spent most of the festive season struck down with a succession of illnesses. While most were just the standard Man Flu stuff, I also spent most of Xmas reeling from one of the fun elements of my disability. I don’t know how many of you agree with me, but I know I have always been amazed at how little information you get from the medical profession when you are disabled. I have always found that if I had been informed about what the future might hold for me thanks to the effects of my disability I might have made different choices. Ever since I a baby, the treatment I had for my cancer has been effecting my body but I have never been told in advance what might be coming. I understand that not many people survive cancer for as long as I have, and that being used as a guinea pig for a new treatment as I was means that no one really has any idea of what is around the corner but it would have been nice to have been given a vague hint of what might be possible. Take my spinal collapse when I was 15 for example. Only after it collapsed did my medical team inform me that they were planning to fix the issue with my back, but they wanted to wait until I had taken my exams. My spine collapsed on the day of my first exam, my German O Level. Now if I or my family were included in this decision, and I am sure we would have preferred to have my back fixed. Especially as I ended up having to go back a year to take my exams anyway… oh and I got a present of paraplegia out of their choice to wait too.

As I get older I find that other issues are coming up from the radiotherapy and chemotherapy I had as a baby, on top of the usual getting old crap. They are nothing too terrible at the minute, but they do mean I have to keep an eye on things as I rush towards old age. I know that many of them could have been lessened if I had known about what my future held when I was younger. Mainly as I might have changed the way I lived and thus have had some kind of control over my body. It’s funny but I have always been obsessed with controlling my body, so I know I would have been obsessive about looking after myself. I mean I am now a tea total, non smoker, who eats healthy and tries to exercise all in an effort to ensure I am in control of my body, yet when I was younger I can only describe my lifestyle as… unhealthy… very unhealthy! I admit I had a pile of fun and am not sure I would have wanted to miss out on what a good time I had. However it would have been nice to know not only the obvious issues I was dicing with but to also have known the problems I might have been causing that were special to being me. Then no one is to blame for whatever happens except myself.

Of course, this is all a bit self indulgent. I am one lucky little sod really as I beat cancer and a really nasty one too. Neuroblastoma is a real pig of a tumour, and I am one very few people who have beaten. OK that number is growing, with a large amount of help from the Neuroblastoma Society. They fund research into finding a cure and give help and support for families going through treatment. I am a patron and working with them really made me realise how lucky I really am.

Having said that, I have also had some annoying experiences around access so far this year that demonstrate how far disabled people have to go in this society. The first thing that happened was I have been asked to leave a local campaigning group after I insisted that access was as important as other local issues. It is a collection of local interest groups all giving their opinion on a new development where I live in Camden. I don’t want go into it too much but on many occasions I have found that my attempts to make people understand that access cannot be bolted onto buildings as an after thought, but needs to run through a design from the ground up, have been met with hostility. Mainly as many of the other people in the group had their own areas of interest. The people who were interested in heritage seemed to be especially upset by my fight to make Camden more accessible. I have never understood why heritage and preservation bodies find the idea of making changes to improve access so sacrilegious. They seem to imagine that the only way to make somewhere more accessible is to destroy their precious heritage, and do not care that maintaining it at any cost leads one section of our society to be left out in the cold and may even not be able to experience or witness the heritage at all. But whatever the individual group’s area of interest, surely access should be of interest to all of them? I know there are methods to allow all of us to work together in such a way that we can all get what we want. Sadly I shall no longer be part of this group, but will continue to fight for a more accessible Camden. At the minute Camden is a very inaccessible place, and I will not rest until it gets better.

I realised just how inaccessible the world can be for disabled people this week, when I attended the funeral of my mate’s father. It was held at the same place as my Dad is buried, so I went up early to visit my Dad’s grave. However I could not get to it, as it was in an corner of the cemetery that I couldn’t get to without pulling a wheelie over other people’s graves. Something I felt I couldn’t do, partly out of respect and partly for my own safety. So instead I had to ask my wife to take a photo of the headstone to allow me to see it. I haven’t seen it since I went into my chair, 31 years ago. As I sat there in the freezing cold, trying to look at a photo on my wife’s smart phone it really hit home just how far away an inclusive world still is.

Anyway, here is that picture. That way not only can I look at it whenever I want, but so can members of our family who are spread all over the world. 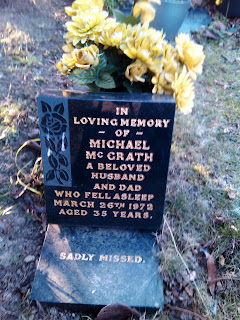 That’s all for now, until next month,