After planning how to avoid that wedding, it seems that I got myself into a rut of doing things when I should have been enjoying the bank holiday. Instead of waving flags and going to a street party, I decided to rebuild my studio. The doors my wife and I decorated, in a very successful arty Jackson Pollack style, were ready to be hung and so we spent Thursday doing the ultimate nightmare… building an Ikea wardrobe. Now I’ve been through some awful things in my life, and met people who have been through much worse, but I am sure everyone will agree that the thought of putting together Ikea furniture fills them with terror. With only a little arguing we managed to get it finished and ready to fill with my collection of classic synths, bits of computer, set of electric drums, keyboard and mic stands, a classic video game called a Vectrex and loads of other bits of junk. So as the morning of Friday dawned, and TV became a no-go zone, I faced the task of moving my studio gear around, building some desks (from Argos by Hygena, very nice and much easier to build), setting up a collection of computers and their peripherals (so many blooming wall warts!) that I seem to collect like some crazy hoarder and preparing to dive into another horrific task… wiring up my recording studio. I have just finished today, Monday May 2nd at around 3.30pm. Only took all weekend.

While I am over joyed that I now only have to set up the software before I can start creating retro synthpop electroclash, and annoying my neighbours, the craziest thing about what I spent this weekend doing is that I had big plans for April 30th. That date is special to me, as it was the last day I walked back in 1981. I attended Gary Numan’s farewell concert at Wembley Arena but during what was going to be a key moment in my teenage life, an even more important moment occurred. Unknown to me, my spine started to collapse and just as my teenage hero stepped onto the stage I was wrecked with agonising pain. I fought through the first half of the superb show, but eventually I had to find somewhere to lay down. So I battled to the back to this massive venue and watched the rest of the show laying a wall. I was so far away from the stage, after being in the third row (I was even in front of Trevor Horn!), that my hero was a tiny little stick figure. Getting home to Luton was another battle, but I was helped by my date that night. (Thanks Karen) I awoke the next day and was still in pain and found it hard to stand. However it was also the morning of my first O level exam, German. So I called a cab and went to school. When I arrived I found I could not walk at all and collapsed in a heap in the door of the cab. I was rushed to hospital and my life as a wheelchair user began, after 15 years walking with the help of a leg brace on my right leg.(Believe it or not, my school sent a teacher to my hospital and I took my exam in a side ward – and passed!) It transpired that the treatment I had been given as a baby for cancer had an unknown side effect, and caused my spine to be deformed and was too weak to carry the weight of my growing teenage body. 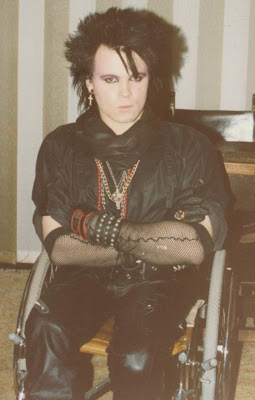 aged 17 – A goth before it was called goth or what!

Strangely I did not find becoming a wheelchair user a bad thing. Instead I saw it as a wake up call. I had spent my childhood being a very good boy. Hard working, very studious and well behaved. I was taking a pile of exams, and had over 10 job offers. Yet I hadn’t done anything fun. I had always wanted to dye my hair, dress weird and go to clubs and pubs like most of school mates. Hey it was the post punk blank, and New Romantics were just starting out. As I recovered from major surgery and came to terms with a new life in a chair, the life that been planned for me no longer appealed to me. A good job with prospects, meeting a local girl, getting married and buying a house in the same street as my parents was were I had been going but now I wanted more. I wanted to grasp life by the horns and ride it for all it was worth. So I sat my parents down and told them that from now on I was going to enjoy myself. They supported me of course, as they are cool, and so I found myself living the kind of life I had only dreamed of as a walker. I purchased a couple of really basic synths and a drum machine, formed a band with my best mate at school and started playing gigs. I dyed my hair, had hair extensions put in and wore more make up than a nightclub full of girls. I began the life I now have. So I see that day, when I lost the ability to walk as a good day. 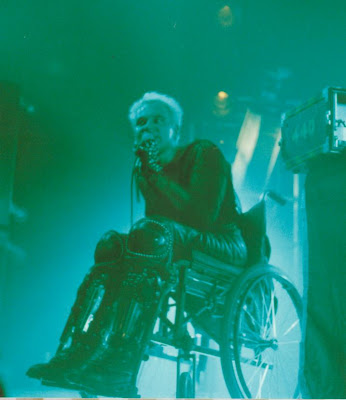 on stage at the Electric Ballroom, on tour with Gary Numan 1991

But in a way it is fitting that I spent the 30th anniversary of that day building my music studio. It was learning to play music that gave me a direction when I was getting used to my life as wheelchair user, and gave me the chance to end up touring Europe with my hero, Mr Numan, in the 90’s and gave me the foot into the media, as well as allowed me to meet my wonderful wife. Music was essential to making me who I am, and I really hope that young disabled people understand that there are more ways to find a direction than sport. I hated sport as a walker, and truly found myself going “Hooray, no more sport!” when I was told I would never walk again. Music, art and creativity is an equal method to happiness and success, if not a better one. While with sport it is either win or nothing, artistic creativity is an end in itself. I never got the chance to release an album or get on Top of the Pops, which were all dreams as I began playing music, but I had a great time trying. Yeah, I didn’t get the chance mainly due to discrimination on the part of the music industry (I’ll tell you more in another blog), but I really lived the rock and roll lifestyle throughout the last 30 years. Maybe a bit too much sometimes!

As I look back on the last 30 years I do so with happiness. I had a great time, and created a Mik Scarlet that I would have loved to be as the spotty teenager who went to that Gary Numan concert. In fact if I had known then what was ahead of me, I wouldn’t have told a soul that I was about to loose the ability to walk. No, walking is just a means of getting around, but the life I have had since that day has been a fantastic roller-coaster that I wouldn’t have missed for the world. So now you know why I wanted to celebrate. The fact I didn’t isn’t a bad thing, as I am getting a bit old for all that partying. Instead I am now ready for the next 30 years. Studio set up, hair dyed, make up ready and a wardrobe to die for. All I can say is watch this space… anything could happen!