Well hello Bloggersphere, sorry for going so quiet recently. It’s been a bit of a crazy time. February was marred by a period of chronic pain, which was nice. And as soon as that passed my work load went through the roof. Mustn’t grumble about that though. Another reason why I haven’t been to prolific on the blog front is that fact that I now get paid to write articles that are so similar to my blogs by various publications that I am finding I have to keep my best ideas for those paid jobs. So that really is nice. But it does mean that I am trying to think of what to actually blog about. So while I struggle with what I can waffle on about in the ether (for free) I thought I’d tell you all about a project that I working on at the minute, and more importantly the actual real events that are behind it. 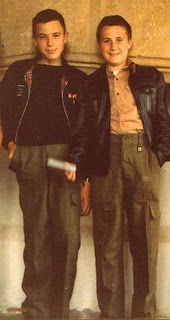 Me and my brother when I was 14, just before my spine went wrong.

As you may or may not know, when I was 15 I was very ill. I was rushed to the Royal Hospital for Nervous Diseases in London, and was put in, what it transpired, was a terminal ward. Very early on in my stay I asked what I thought was a doctor what was wrong with me. Without batting an eyelid he informed me that I had cancer and that I was dying. Suddenly I was a boy of 15 who was about to check out. I was still a virgin, who had never been to a nightclub or dyed his hair. Or at least these were the things that I would never do that I listed in my mind. I had to ring my Mum to tell her, in floods of tears, and then laid in bed for the nearly 24 hours despairing about all the things I would never do. Then the next day my parents arrived and together we asked my surgical team what was going on. It then transpired that I did NOT have cancer, and while it was serious I was not dying. The worst thing was that the guy who had told me this turned out to be an orderly wearing a white coat. Funniest moment during this was seeing my doctor grab this orderly and pin him against a wall, while shouting at the top of his voice. He was not a happy man. So while I was not dying (yippee), I did spend the next couple of months being treated in a terminal ward, watching almost every other patient passing away (boo). Sometimes in very gruesome ways. Real horror film stuff.

But all of this did really change who I was. By the time I was let home from hospital, nearly nine months later, I had truly learned how precious life was and it made sense to live each day as if it might be your last. I had experienced what it was like to lay in bed, dying with a huge list of things you wished you’d done. I vowed that the next time this happened my list would be of all the things I had done. So that is how I started living. I won’t say that it always paid off, and I have made some crazy mistakes in the name of having fun and living fast but I have made some amazing memories and done some amazing things. 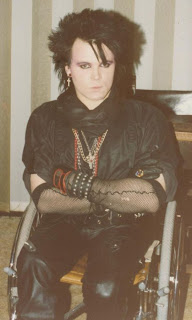 So what has this got to do with my project? Well recently I have been writing a play with the help of the fantastic Graeae Theatre Company, based on this very experience, called The List. I am very nearly finished, with a just a few lines left to go. Then it’s just a bit of time doing rewrites and my first play is in the bag. What will happen to it once it’s done, I don’t know but I do hope it does get performed. I do know that the “dying/not dying” moment in my early years helped me find what was important in life and I feel that this play might be a much less traumatic way of helping others to do the same. (At least I hope it won’t be as traumatic – depends on how good my writing is eh?) If nothing else it would be a night out.

The funniest thing is that when I was at school my English teacher read out something I had written to the whole class as an example of terrible work. She said I was terrible at writing and would never pass an English O Level (Of course I did pass one with a B) Now every time I have another article published, perform a song or poem, and now do some creative writing I think of her and go “Up Yours” in my head. I won’t even mention my music teacher who told me I was tone deaf… I then went on to be one of the only pupils from my year to become a professional musician. School eh?

Right, that’s enough from me. Always remember, life’s too short to regrets. Or it’s always better to regret doing something than regretting not doing it. Might get messier or course, but much more fun!